We built a multiagent simulation system to create social media update streams during a natural disaster, and use the 2018 Montecito mudslides as a scenario to extensively test which update characteristics, citizen participation and citizen movement characteristics contribute to the quality of being able to map a disaster purely on citizen update streams in real-time.

This video shows our work modeling the mudslide as a spatio-temporal event used as input for the multiagent system. 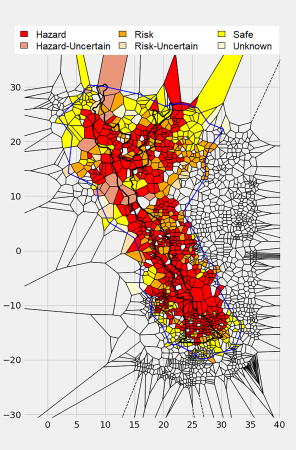 Natural disasters such as flooding, wildfires, and mudslides are rare events, but they affect citizens at unpredictable times and the impact on human life can be significant. Citizens located close to events can provide detailed, real-time data streams capturing their event response. Instead of visualizing individual updates, an integrated spatiotemporal map yields ‘big picture’ event information. We investigate the question of whether information from affected citizens is sufficient to generate a map of an unfolding natural disaster. We built the Citizen Disaster Reaction Multi-Agent Simulation (CDR-MAS), a multi-agent system that simulates the reaction of citizens to a natural disaster in an urban region. We proposed an rkNN classification algorithm to aggregate the update streams into a series of colored Voronoi event maps. We simulated the 2018 Montecito Creek mudslide and customized the CDR-MAS with the local environment to systematically generate stream data sets. Our experimental evaluation showed that event mapping based on citizen update streams is significantly influenced by the amount of citizen participation and movement. Compared with a baseline of 100% participation, with 40% citizen participation, the event region was predicted with 40% accuracy, showing that citizen update streams can provide timely information in a smart city.